You’ve reached your villa, now you just need to know how to get out and about to go sightseeing! We’ve put together a summary of all the need to know travel options in Sri Lanka.

You can find taxi’s everywhere in Colombo and they can be a good option to get from the airport into the city, but if you’re traveling outside Colombo taxi’s can be a rare and expensive option.

Tuk tuk’s are all over the country. Even in the most remote villages in Sri Lanka there will be someone who has a tuk tuk.

If you’re in Colombo, you will find that tuk tuk’s have meter’s (as of April 2016 – Rs. 50 for the first kilometer and Rs.30 for each kilometer after). Make sure you check whether the meter works before you get in!

Outside of Colombo, you can still take a tuk tuk but be warned that they will charge tourists about double the usual price. So don’t forget to haggle and agree on the price before you get into the tuk tuk.

By chance if you are well outside of the city and find a really friendly tuk tuk driver, they might even teach you how to drive a tuk tuk (but careful to find a place where there aren’t many people or vehicles).

In the beach towns, the best way to get around from place to place is to hire a scooter. It is best to bring your international driving license along with you when you come. You will have to give a small deposit and then rent the scooter per day. 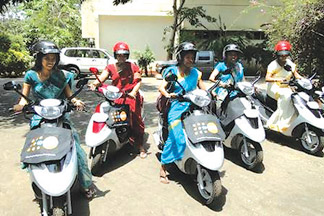 The places where you will rent the scooters will also be able to rent you bicycles and sometimes your hotel or guest house will be able to rent bicycles as well. Be mindful of the heat and humidity and be ready to sweat. And most importantly, be careful when going on the main roads. Drivers in Sri Lanka are known to be reckless and road rules are not really followed. Pay attention and ride safe!

Adventures for the adrenaline junkie